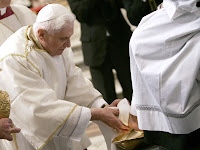 image source
The Week 27 guide for the Online Retreat in Everyday Life is here.

The first time I experienced Holy Thursday Mass, the Mass of the Lord’s Supper, I was a fairly new Catholic and I had a pew full of family, because Holy Thursday that year coincided with the anniversary of the first of the babies we remember, but who preceded me in the family by quite a few years, Darren (who I wrote about here and here). My sister-in-law and her kids, who were then wee ones and much fun during Mass (the youngest was four, the oldest eight), and my mother-in-law were there with me in the back row. When the foot-washing procession started, the older of my nieces looked at me.

“Aunt Sarah,” she whispered, “can we go up there?”

How could I say no? It was open to everyone (though I’ve read since that there’s debate in some circles about the appropriateness of women and/or children having their feet washed), and there was no excuse — except my pride — to keep us from going.

Up we went, from far in the back of church to the front. Father knelt over, despite his bad knees, and gently, lovingly washed our feet. He thanked us, quietly, for being who we are.

Every year, Holy Thursday has been a Mass I try to attend. It’s hard, every year, to participate in the foot-washing, and without a small child to persuade me, I’m more likely to stay put in the pew. My feet are as stinky as anyone else’s, and it is a bit embarrassing to feel Father’s hands on my foot, and then…to have him kiss it! Every year, it’s almost more than I can take.

My nieces and nephew — and, in recent years, my children — were so eager to have their feet washed, so accepting of the kiss Father gave their feet, so excited about the whole process. No, they didn’t understand it.

Do I really understand what it takes to allow someone else to help me? Do I really appreciate how much work humility is? Do I really strive to be humble, or am I trying, instead, to simply appear humble?

This week, though we’re a few weeks away from Holy Thursday, I’m going to resolve to wash the feet of someone, just one person, to be servant as Jesus was servant, to be a witness to the power of the Eucharist.