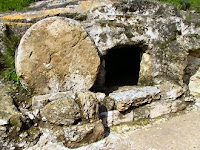 The Week 30 guide for the Online Retreat in Everyday Life is here.

After weeks of contemplating the end of Jesus’ life, I find myself here, on Easter morn, a little…speechless.

Recently, someone dear to me asked me about my faith journey. From what they could see, I went from being a pretty ardent atheist to being an equally enthusiastic Catholic. It didn’t make sense.

I’ve been chewing on what I will tell them for over a week. “Can I just send you some of the other stuff I’ve written?” I emailed.

No response. While I attribute that lack of reply completely to busy-ness and nothing else, maybe it’s also a sign to me that it’s time.

Maybe the best place to begin that story is in front of the open tomb. Jesus isn’t there anymore. His bruised body has risen to new glory. He has defeated death.

How can this be?

And it’s ironic to the max.

I love irony. I remember learning about it in fourth grade and recognizing, at last, a word for that feeling I had when I really, really enjoyed something. It was irony!

It’s ironic in the unlikely aspects of it: young Jewish girl, small town in Israel, no-name carpenter to raise the Messiah. The Messiah rides into town, not on a horse and not leading legions of soldiers to defeat the persecuting Romans, but on a colt, with a band of illiterate fisherman tagging along behind him.

It’s ironic in the ongoing saga: that Jewish carpenter inspired those twelve fishermen to give their lives in martyrdom, because they believed him. It continues to change lives, souls, worlds.

It’s ironic in the fact that it wasn’t recognized at the time, that the fulfillment of all the prophets and scripture would go unnoticed by the scholars. It’s ironic that it would sweep the world and continue for 2000 years in an unbroken line. It’s ironic that I could consider Christians an uneducated bunch of dreamers (not in the good sense of that word) without doing more research than just what I thought of it.

That empty tomb speaks to me. It reminds me of what Jesus did for me…yeah, he died, and that’s the biggie. But he also washed my feet, and he will do it again, and again, and again, as many times as I’ll let him. He washes my soul just as often, when I let him.

This week, during the retreat, consider the many ways in which Jesus has risen in your life: how he has become someone you turn to, the ways he has become a friend, the times he held you. While you reflect, think of how Jesus is alive in you, with you, for you.