One of the special saints in my life is Saint Elizabeth Ann Seton. She’s so special to me, in fact, that we picked her as my oldest daughter’s patron saint. (Or one of her patrons, anyway.) I love the idea of turning to Saint Elizabeth for mothering tips, and these tips, in particular, speak to me.

It’s a rare mother who doesn’t wonder how to best prepare her children for life as adults.  Moms instinctively know how to protect their young, but where can they find lessons in teaching them how to embrace all of life?

One of the finest examples of motherhood under fire is that of Saint Elizabeth Ann Seton (1774-1821).  A member of a prominent New York family, she was only 29 and the mother of five when widowed.  Elizabeth ‘s faith led her to convert to Catholicism while caring for her children, to found the religious order called the American Sisters of Charity and to become the first saint born in the United States (1975).  She provided some valuable lessons in parenting for contemporary moms:

Accept the Responsibility of Single Parenting

Elizabeth Bayley’s mother died when Elizabeth was a toddler.  After her father, a doctor, remarried, Elizabeth’s stepmother rejected her and her sister. While Seton traveled, the girls lived with his brother’s family.  Once her father and her stepmother separated, Elizabeth entered a period she later described as depression.

Despite these dark days and the pain of rejection, she readily accepted the responsibility of being a single parent instead of sending her children to live with various relatives.

Elizabeth’s life was filled with loss.  Her chronically ill husband went bankrupt before he, Elizabeth and one daughter sailed to visit friends in Italy.  He died on the ship.

Once Elizabeth returned to New York and sought instruction in Catholicism, she faced heavy persecution.  Rejected by her Episcopalian relatives and friends, she entered the Church.

Life in the Catoctin Mountains of Maryland was physically hard for Elizabeth, now a religious, and her children.  Many of the Sisters perished from the harsh conditions. Daughter Anna Maria Seton (1975-1812) contracted tuberculosis and became a Sister of Charity on her deathbed.  Rebecca (1802-1816) also died of the disease, after a fall on ice left her lame.  Elizabeth experienced a slow and painful death from the illness.

True to her Catholic beliefs, Elizabeth taught all her children to embrace suffering and to lean on their faith for comfort. Her focus was on devotion to the Blessed Mother as she prayed her way through grief and lived life with gratitude.

Reach Out for Help

Elizabeth taught her children the wisdom of asking for help when needed.  After her husband’s death, she stayed with the Filicci family in Italy.  Once she and her daughter returned to New York, the Filiccis provided the family with moral and financial support.

When Elizabeth’s attempt at a boardinghouse for school children failed, she sought out the president of St. Mary’s College in Baltimore. He gave her a teaching position and a residence for her family.

Thanks to wealthy Samuel Sutherland Cooper, also a convert, the Sisters and the Seton children had a small cabin in Maryland in which to live until their stone farmhouse was ready.

Cherish the Identity of Each Child

Despite many sorrows, extreme poverty and the demands of running a religious order, Elizabeth Seton made sure her surviving children were prepared for life, according to their respective abilities, interests and motivation.

Son William Seton (1796-1868) was commissioned as U.S. Navy officer.  His children included an archbishop and a Sister of Mercy.  Richard (1798-1823) died prematurely while in the Navy and aboard a ship. Catherine (1800-1891) was the only child present at Elizabeth’s death and eventually became a nun.

While people remember Elizabeth Ann Seton primarily as a saint, she had important lessons to offer as a wife, convert, religious, widow, single parent, educator, spiritual leader, multitasker and, of course, a mother. 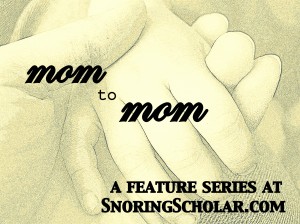 Read more posts in the Mom to Mom series.

Caroline Vena enjoys writing about Christian values and beliefs and about her own lessons as a Christian wife and mom. She also volunteers at her church and writes curriculums, devotions and background texts that help others learn about the Bible and Christianity. She is a freelance writer for McVan, Inc.

I Want to Remember

Can you have a life of virtue without God? {An Atheist and a Catholic}