Putting the Barns to Good Use

Yesterday, we had an amazing day. 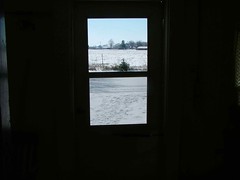 See that? Well, yes…that’s a door. But see what’s outside? The SUNSHINE! See the sunshine? When Prince Charming suggested we go out to the Claypool Crib for some much-needed Outdoor Time (read as: Expending Recuperating Three-Year-Old’s Energy Time), I promptly forgot all about putting laundry away and doing dishes. I didn’t think twice about any of the things I had been meaning to accomplish.

You might say I had bigger fish to fry. 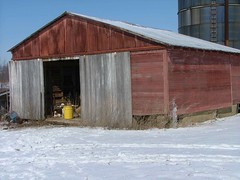 Here it is, in all of its faded paint glory…the Claypool Crib. In the post where I mentioned its name, I neglected to mention that the other reason it is so named is because just as horses crib at wood, chewing it away and causing their owners much frustration, so Heather has “cribbed” on the idea of this barn, on which angles to photograph it, on the play of the setting sun, on the area all around it.

Yesterday, I was all eyes for that open door. See it? Behind that yellow trash-can-turned-work-table is Prince Charming himself, waiting for his girls. 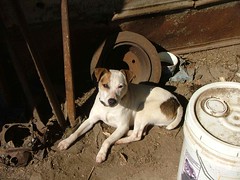 And this is the Jack Russell Terror. He is enjoying the sunshine. He didn’t even bother to get up and come jump on us.

Yes, he’s cute. But don’t be fooled. Jack Russells have to be cute. It’s how the breed has survived with humans. Seriously. 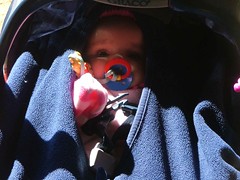 This is a bundled-up baby. Look closely. I assure you, she’s there. 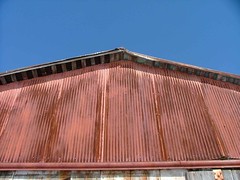 Cerulean sky, faded red barn, sun on your back.

Does it get any better than this? 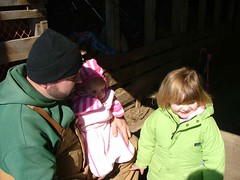 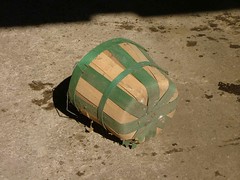 This might look like junk to you, but to me, it brings up memories of summers spent at Grandma’s orchard: filling baskets like these with sweet-tasting apples, emptying buckets like these to make hot applesauce, toting around buckets like these because they’re just the thing for all the little things you have to carry around with you.

Maybe we’ll skip spring and summer and jump right into fall, with all this talk of apples! 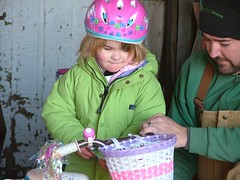 But back to what was going on inside the barn. That bike that fit Miss Muffet so well in the fall has shrunk a bit. So Daddy and her had to do some adjusting. It requires a lot of concentration, this adjusting-of-the-bike. 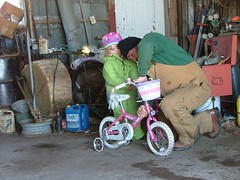 I leave the tools to them.

I prefer ‘puters and books and cameras, thank you very much. 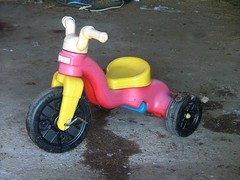 As Miss Muffet zipped around the not-quite-big-enough-but-better-than-nothing space on her bike, I caught sight of this old thing. This bike has been around this place since Rebecca, Bo Peep’s oldest daughter, was but a toddler herself (she’s something like 11 or 12 now…I’m in denial). It’s missing a pedal, but that never stops the kids from climbing right on it. 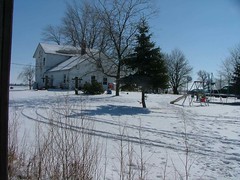 An afternoon outside would be wasted if we didn’t head out to the Big Barn to see the toddler lambs. So we stepped out of the Claypool Crib. 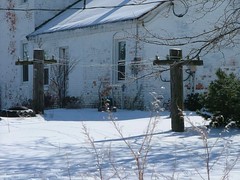 On second thought, let’s NOT skip spring and summer. I can’t wait to hang out clothes, to gaze out across the land, to contemplate the feel of the fabric and the weight of the world. I can’t wait to watch my little patch of land change with the seasons and feel the dirt of my garden under my fingernails and in between my toes. 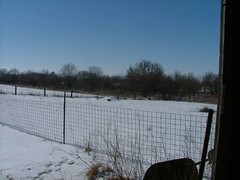 And before we leave the Crib completely, this is the view off to the right. I would have missed this shot, had Prince Charming not said, “Hey! Did you get any pictures out this way?” It really is lovely. When it warms up, there are sheep out there in the pasture. They make the most romantic white fluffs to the green landscape. That’s also the direction the sun sets, in explosions of orange and red, with streaks across the sky. 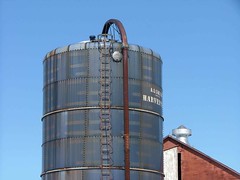 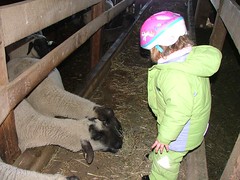 Here we have Miss Muffet (complete with snow pants and a bike helmet) and the Mama Ewes. She is thoughtfully pushing their hay closer to them, and they are very appreciative. She’s talking to them as she helps them get their hay, and she’s totally ignoring the mama ewes on the OTHER side of the barn who are bellering and hollering (those are REAL WORDS, people, and that’s JUST how we say them!). 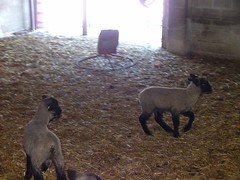 World, meet this year’s toddler lambs. I tried (in vain) to get pictures of their leaping antics. This is as close as I came to anything even closely resembling a leaping antic. I’m going to invite Heather over to take a bunch of them, and then I’ll be able to better share the joy and the dizzying leaping heights and the energy that’s in the barn right now. 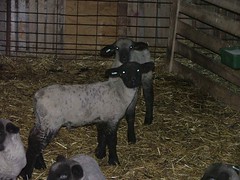 They’re still cute, don’t you think? They’re not little babies anymore, but they are still cute. 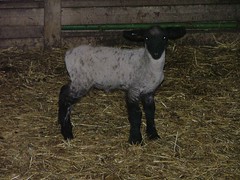 “Hi everyone!” (Shepherd D will probably look at this picture and wince. He’s all about the perfect pictures (he’s in the sheep SELLING business too). I, on the other hand, am all about the CUTE pictures.) 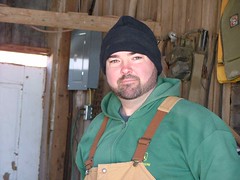 And this is the man who makes it all possible, Prince Charming himself. (Pause for swoon.)

And with that, I leave you to your own prayer of thanksgiving (I cannot look heavenward after all that and just say “Thanks, God – you must REALLY love me!”). 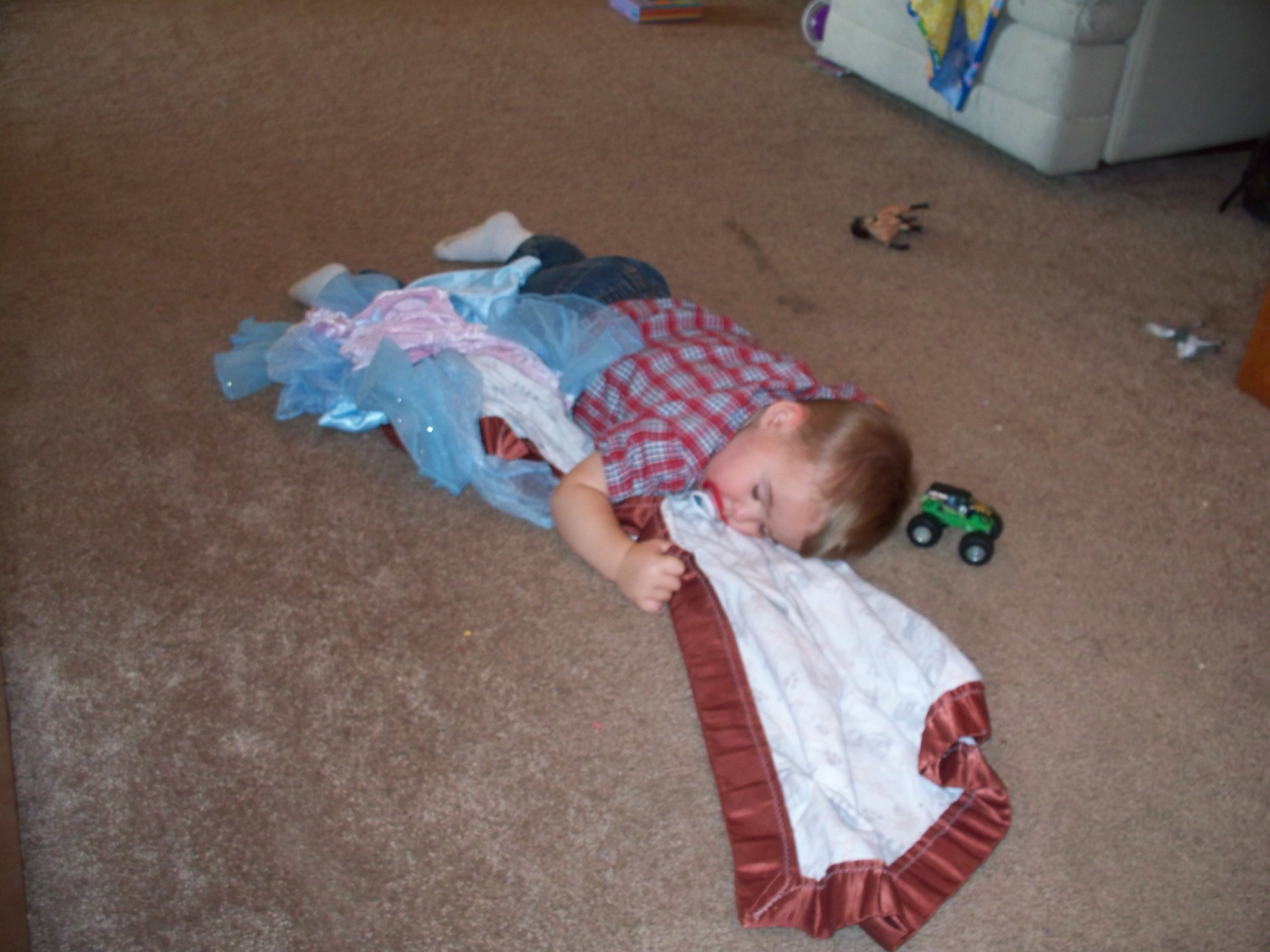 Wordless Wednesday: a boy’s gotta do…

Image of the Father