If I’m awake at 3:15 AM, I’m not usually online and blogging. This strikes me as common sense. But since I was WIDE AWAKE this morning (or is it night?), and since I hadn’t scheduled my Quick Takes (did not, in fact, know what all my Quick Takes would be, prior to this session with my laptop), I thought I might as well share with you what it is that brings me to my WIDE AWAKE state today at 3:15 AM.

I’m here because of our Cattle Dog*, who has been barking for the last four hours. She’s been outside, on the porch side of the house, barking. And barking. And BARKING.

Our late Jack Russell Terror used to have barking jags too, especially once he became an outside dog. But, the thing is, with him, it was always for a reason, like a coon or a critter of some sort.

Oh, and she’s not barking anymore. I put her in her cage. Why did it take me four hours to reach that point? Well. Good question. I’m asking myself at exactly what point I thought she would just…stop…with her barking. Was I waiting for someone else to take care of it? Maybe it’s safe to say I was just trying to sleep.

After I caged the Cattle Dog, I thought I’d check on the pups. (For those of you who didn’t see it on Twitter, Facebook, or my post on Tuesday, we jumped off the deep end last weekend and got not one, but TWO Jack Russell pups.) We’ve been keeping them on the porch, and a niggling little voice in my head was wondering if the reason for Cattle Dog’s barking was something with the pups. She was barking on that side of the house, after all.

I walked onto the enclosed porch, and one of the pups jumped right out of his cozy little bed, ready to play.

But where was the other one?

I called him. I made a kissing noise. I asked the bouncing pup where his brother was.

And then I heard the whining.

The puppy was IN THE FREEZER. We recently redid our porch and it’s still cleared off, because I was expecting to paint the floor. After we got the pups, I decided to wait until we had completely moved them outside before I did the floor.

All that’s on our enclosed porch is two dog beds, a stepladder, the dog dishes of water and food, and a chest freezer.

I could hear him on the other side of the little vent thing on the side. Aside from wondering how in the world he got in there (he’s pretty small), I also wondered how I was going to get him out.

This is the sort of thing that falls under my husband’s domain. It involves a screwdriver and solving a spatial puzzle.

I was unable to wedge the vent open (how did he get IN THERE?!?) and also unable to find anything resembling a screwdriver (I’m SURE we have them here somewhere). So I did what the situation warranted: I went upstairs and told my husband.

He hadn’t been asleep. Cattle Dog had been barking for FOUR HOURS, remember? Only the kids slept through that, and then only because I took them to the fair last night.

His head never left the pillow.

With one eye open and his head still cradled in his arm, he mumbled, “He CAN’T be in the freezer.”

I didn’t stick around to bug him about it. Someone had to rescue the pup, after all!

Was I going to have to go to the barn to find a screwdriver? I was dusting off the area of my mind that ineffectively deals with this and telling myself it was NOT okay to call anyone, rationalizing that the puppy would probably live until morning, when I stepped back onto the porch.

Puppy #1 was romping with his brother. He was out of the freezer.

I have NO IDEA how he got in or how he got out of the freezer. I put a full can of paint in front of the vent, and if he gets back in the freezer, he’s going to be there until morning, because I’m going back to bed to salvage some sleep.

My husband is going to be laughing at me for at least a week over this, and I am filing it as the beginning of another decade (at least) of Jack Russell tales. (I have quite a few from our last encounter with this breed.) 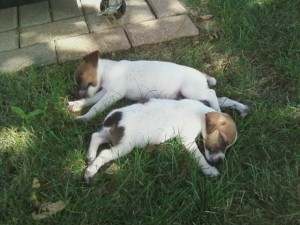 We have Jen at Conversion Diary to thank for our weekly dose of Quick Takes. She hosts every week, rain or shine (or incessantly barking dogs), and we are eternally grateful.

Dog Tales during the Dog Days

Six Advent Resources and One Giveaway of Welcome Baby Jesus