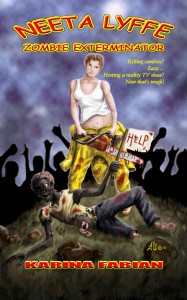 Today, I’m honored to share an interview, Quick Takes style, with one of my favorite authors and an inspiration to me in my own writing, Karina Fabian, about her latest release, Neeta Lyffe: Zombie Exterminator.

1. Confession: I haven’t read this book yet (though it’s in my pile), but I couldn’t resist the chance to interview you during your book tour. Though I generally shy away from horror these days, I’m eagerly anticipating reading this. Karina, share your approach to horror (because I sense a lot of humor in it, and I like that).

I don’t approach horror.  I sort of slink away from it, tippy-toe, if need be.

If it weren’t for the fact that zombies automatically put it under horror, I’d call it comedic science fiction.  It takes place in the future, and zombie-ism is a disease.

It’s definitely a comedy.  Think The Apprentice meets Survivor meets Night of the Living Dead.  Plus, there’s all kinds of political and social satire, a little slapstick, some jokes that made my teenage daughter say, “Mom!” with that mix of horror and pride. Not as many puns as my usual comedies, but Neeta isn’t a punster.

2. I know this novel came about, in some small way, because of the Zombie Cookbook. www.zombiecookbook.net Tell us about that connection.

Neeta Lyffe is the main character in “Wokking Dead,” where she and her partner, Ted, take on an infestation of zombies in a Korean restaurant.  People enjoyed her quirky outlook so much they asked the publisher if a novel was coming out.  Kim approached me at a time when we were getting goofy with some online friends.  The idea of reality TV came up and I had an inspiration–a reality TV show where Neeta trains exterminators.  I had only one line to start:  They ate Eidleberg.  The rest flew from there.

3. Give us a taste of Neeta Lyffe as a person. If I ran into her on the blogosphere or at a restaurant, what would she be like?

Sweet. Sensible.  Very down-to-earth.  She’ll talk to you about zombie extermination, but if you want to discuss fine art, she’d love it. (That was her major, incidentally.)  She doesn’t like the fame of having hosted Zombie Death Extreme, but she’s glad she was able to increase awareness of the dangers of zombie-ism, and how the average person can protect themselves.  That’s why she does what she does–to make people safer, whether it’s from roaches in the cupboard or zombies in the alley.

4. What’s your favorite part of this book?

The characters.  Neeta turned out to be so much more than I imagined her.  Roscoe was the most fun to write.  I enjoyed snippy LaCenta, Crying Katie and Stuttering Spud.  I knew I had Brian St. James, the radio host, down perfectly when my teenage daughter gagged and declared she knew guys like that and didn’t understand how anyone would date them.  You know, I still don’t know what happened to Gordon in North Korea, but there’s nothing as much fun as writing an ex-Marine with issues.  I also learned the proper way to spell OOH Rah!  Even the bit-part characters that came out of the woodwork to star in the documentary in progress were a blast to write.

5. What are the larger issues you’re addressing with Neeta Lyffe, or is this just a fun read?

Frankly, I was in it for the sheer escapism. Any deep-seated issues the literary world finds are theirs.  (So, English proffs reading this–please use it in your classes if you like, but don’t fail some kid because their interpretation isn’t “the right one.”)

6. As a practicing Catholic, how does your faith impact your writing when you are writing in these non-Catholic genres and arenas? (OK, this question feels lame, but if you see what I’m getting at, I’ll work on rewording it better.)

First, I make no claims to putting anything “Catholic” in Neeta Lyffe, Zombie Exterminator, except for the Pope (and the Baptist Convention) agreeing that zombies may be the embodiment of evil, but it’s perfectly okay to defeat them with a chainsaw rather than a crucifix.  (Of course, the Baptists would say “Raid rather than Revival.)

I’m a character-driven writer, so my stories get driven by the characters.  So, for example, Neeta had no qualms about cutting off a guy’s head after he’d been bitten by a zombie.  To her, it’d be worse if he came back and went after his family, as zombies often do.  Roscoe, who is a professional reality TV contestant with personality to match, never lets you know if he’s straight, gay or both.  (He jokes that he’s “not particular.”)

However, I don’t cross certain lines.  I may play with innuendo, but I try not to glamorize sin.  Neeta tells her sexy new boyfriend that she’s waiting until marriage, so don’t even go there.  If Roscoe has a date during the course of the book, he never told me–and I didn’t ask.  Roscoe was a riot to write and fun to read, but nobody will read his character and think, “I want to be like him.”  As for Neeta chopping off Bergie’s head–once a zombie bites you, you die fast and come back. It was defense, but she still takes a lot of heat for it.

7. What books are you reading these days, Karina? What novels inspire you?

I was reading some children’s books to get into the swing of things for a Catholic kid’s book I want to write.  However, I’m the obsessive type, so I can either read or write, and at the moment, I have too many writing demands.  On the non-fiction side, I am reading a book of saint quotes.  It’s research for a novel and a school planner I’m writing, and inspiring besides.

Thanks again to Karina for joining us. Be sure to stop by and check out the other variations of Quick Takes that are hosted by Jen at Conversion Diary.

Interested in learning more about Neeta Lyffe? Karina will be all over the blogosphere during her December book tour!

The Day after Christmas

The tip-off that it will be a great read