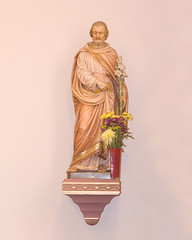 Though I have lots to say about Saint Joseph, I know I won’t get it said today. I can’t resist, though, doing a Saint Joseph post, it being his feast day and all. So here’s the post that ran last year in honor of my good friend Saint Joseph.
—
Next Saturday, because of Holy Week, we’ll be celebrating the feast of St. Joseph a few days early. This year it has a special meaning to me.

I never paid much attention to St. Joseph, aside from acknowledging him as the head of the Holy Family in a rather passing way. I never thought much about him, aside from his patronage of my lovely little parish. I really never asked for his intercession or pondered his special role in salvation history. It sounds silly to me now, but it just never occurred to me.

Earlier this year, a friend casually suggested (in a reply to a long whiny my-husband’s-job-sucks-blah-blah-blah email from me) that we pray a St. Joseph novena together. It was sort of like a slap to the forehead, and it wasn’t from the friend who’s usually my novena buddy.

A novena to St. Joseph made sense in so many ways – he’s the patron of fathers and workers, not to mention families. Wouldn’t he have a special interest in my little family? And couldn’t his prayers, perhaps, be especially close to God, seeing as how God trusted Joseph with his son and all?

So we started our novena. A few days into it, my husband got a call asking him if he would be interested in an interview with a company he had only just sent a resume to. Then, the day after his interview, our second daughter was born. Then, on the last day of the novena, he received a call asking him to come in for a second interview.

Needless to say, I started a second novena of thanksgiving.

The formula we followed for this novena was pretty simple. Three sets of an Our Father, Hail Mary, and Glory Be (I also added the Fatima Prayer), followed by a heartfelt petition to St. Joseph for his prayers. It was something I could do while going about my morning duties, and it didn’t take so long that I was tempted to put it off (and thus risk forgetting it).

Earlier this week, my novena buddy and I just wrapped up a very beautiful novena to St. Joseph (found at EWTN). It explores a different aspect of St. Joseph on each day, and the other day, I posted Our Friend in Suffering. I just hadn’t thought of Joseph that way. In fact, I just haven’t thought much about St. Joseph at all, not the way I’ve thought about Mary and how she must have struggled and how she still remained open to the graces God sent her way.

Joseph was a pretty amazing guy, now that I think about it.

Who better to turn to as I gaze at my husband and then think about the state of fatherhood?

It doesn’t get a lot of press, at least not the good kind. Men are portrayed as less-than-intelligent so many ways. They’re interested in only “one thing,” we’re told time and again, and goodness gracious, how can we expect them to NOT be? “That’s just how men are,” we’re told. And this is just one example.

Now think of St. Joseph. There he is, with a wife who’s pregnant. He knows HE’s not the one who caused that pregnancy, and he knows how pregnancy is caused. Then, think of how it must have been. We hear all about Mary’s “YES!” but there was a “YES” from Joseph too. He said YES when the angel came and assured him that all was legit with Mary’s pregnancy. He said YES when the angel told him to get out of Dodge and head to Egypt. He said YES in a million little daily ways.

Look where it got him – he died in the arms of Mary and Jesus, and I’m certain his was a one-way ticket straight to Heaven.

Arguing with Idiots (in my own mind)

I never said the lines would be straight