Seven Marys for May

I shared five of my favorite May Marian feasts at Faith & Family Live earlier this week, but couldn’t resist the chance to share a few more…While we’re on the topic of May and Mary, what’s your favorite Marian celebration in May?

In Catholic tradition, the title Queen of Heaven has been included in literature, prayers, and devotions almost since the beginning, back when the apostles were still walking the earth.  It stems from the custom, in the Old Testament kingdom of David, of the queen mothers.  Since the kings had many wives, due to reasons of state and human weakness, the honor of queen was reserved for the king’s mother.  Her authority was greater than the many wives; for one thing, there was only one of her.

When I think of Mary as Queen of Heaven, though, I don’t picture her as a dictator, and, though the little girls in my life would dispute this, she’s not wearing anything fancy. For me, Queen Mary is an everyday sort of woman.  She’s busy helping…the unhappy dying who need comfort, the frazzled moms who need sanity, the desperate poor who need sustenance.  She isn’t kicking back and having her feet massaged, but is rather holding a new infant and the parents whose hearts are broken, welcoming a young woman through the garden gate, and praying for the many on earth who cry out to her.

Mary is a queen who wears an apron and drinks her tea on the go, though I believe she always has a moment to sit down and savor it — and the company she’s in — given the chance.  She’s a gardener who plants seeds in hearts and waters them with her prayers.  She’s a cook who stirs in love and simmers it over the fire of her Son’s mercy.

Maybe I’ll find out someday that Mary wears a sparkly crown.  I think it more likely, though, that she’ll be dazzling without need for all the accessories.

Taken in part from a column written last year about this title.

On Mother’s Day, I can’t help but think of Mary. Oh, I think of those women who well deserve the title Mother from my lips, and I try to honor them accordingly. But it is to my heavenly Mother that I often turn on this day.

I can’t help but remember the Mother’s Day Mass the year before I became Catholic. My relationship with my own mother was very fractured at that point, and I was in the midst of a five-year period in which I did not talk to her or communicate with her at all. It was at Mass, as Father was talking about the love Mary has for each of us, how she holds us and comforts us, that I found myself sobbing, shaking and hiccuping and crying in great gulps. I had to go to the back of the church and I was unable to come back in. Afterward, I was unable to tell anyone what came over me. I didn’t know myself. Looking back, I think Mary must have touched my soul, and my hard heart must have softened enough to let the light of God’s love shine just a bit onto it.

Perhaps this year, in addition to whatever observance you make in honor of motherhood, you can give Mother Mary the gift of a few moments spent with her Son.

Our Lady of the Blessed Sacrament – May 13

It is the delight of the ordinary, the experience of Jesus being interested in the silly little details of my life, which comes to mind when I hear the title Our Lady of the Blessed Sacrament.  Saint Peter Julian Eymard honored Mary with this title, pointing us to her intimate relationship to — and with — the Eucharist and reminding us of her role as a model for us.  She shows us how to trust, even when we may not understand God’s plan.

Mary never stopped or paused in her devotion to God. She lived with His Son in a most intimate way, by raising Him, and she was one of a few who were able to stand at the foot of the Cross.  When it became clear that, in fact, Jesus meant for His followers to eat Him, to consume Him — and not just in a metaphorical way! — she was first in line, not because she was a raving cannibal, but because she trusted that God knew what He was doing.

More of the story is in a column I wrote last year about this title.

By the time of Pentecost, I’m sure the Apostles were feeling transformed.  They stood, knelt or sat, in the Upper Room, where the Last Supper had taken place a short while before, with a few women, the Virgin Mary among them.

She’s there when the Holy Spirit comes.  This is nothing new to her; she was exposed to the Holy Spirit in the most intimate way at the Annunciation.  Yet, even though she doesn’t need the Holy Spirit, having already received Him, she’s there, in the Upper Room, praying and waiting with the Apostles.

It is for this reason that she’s called the Queen of Apostles, and it’s a title that has particular meaning for me.  Here I see Mary, not as a mother, but as a friend and a mentor.  She’s royalty, and yet she has time — she makes time — to help each of us.  Maybe I need help with my rowdy toddler, with the extra attitude in my preteen, with my procrastination on a project.  She’ll find me in the laundry room, on the phone, at the beach.  When she finds me, she’ll do what she has been doing with the people around her for centuries: offering Jesus, plain and simple.

A woman’s work is never done, and it’s no different for a queen.  I wonder if, that day in the Upper Room, Mary found herself getting drinks and snacks.  Would the men have thought of the implications of hours in a small room together?  I imagine her smiling to herself, taking care of the things that needed doing, making sure that the Apostles stayed on track.

The Apostles preached with words, performing miracles.  Mary, on the other hand, lived a miracle and proclaimed it with her ongoing “Yes.” If she found herself at the beach without a bucket, I think she would have just laughed and thought up something better.  Maybe she would have pointed out the silliness to her Son, Who would have certainly have forgiven the oversight just as quickly as my four-year-old did.

More of the back story can be found in a column I wrote a while back.

Virgin Most Holy, Mother of the Incarnate Word and our Mother,venerated in the Shrine of Sheshan under the title “Help of Christians”, the entire Church in China looks to you with devout affection. We come before you today to implore your protection. Look upon the People of God and, with a mother’s care, guide them along the paths of truth and love, so that they may always be a leaven of harmonious coexistence among all citizens.

When you obediently said “yes” in the house of Nazareth, you allowed God’s eternal Son to take flesh in your virginal womb and thus to begin in history the work of our redemption. You willingly and generously cooperated in that work, allowing the sword of pain to pierce your soul, until the supreme hour of the Cross, when you kept watch on Calvary, standing beside your Son, who died that we might live.

From that moment, you became, in a new way, the Mother of all those who receive your Son Jesus in faith and choose to follow in his footsteps by taking up his Cross. Mother of hope, in the darkness of Holy Saturday you journeyed with unfailing trust towards the dawn of Easter. Grant that your children may discern at all times, even those that are darkest, the signs of God’s loving presence.

Our Lady of Sheshan, sustain all those in China,who, amid their daily trials, continue to believe, to hope, to love. May they never be afraid to speak of Jesus to the world, and of the world to Jesus. In the statue overlooking the Shrine you lift your Son on high, offering him to the world with open arms in a gesture of love. Help Catholics always to be credible witnesses to this love, ever clinging to the rock of Peter on which the Church is built. Mother of China and all Asia, pray for us, now and for ever.  Amen!

Mary at the Visitation – May 31

It’s a mystery of the rosary, and one I come back to often. When I pregnant with my Elizabeth, I was touched to feel her first movements when I was at Eucharistic Adoration in the wee early hours one weekday morning. After I told a colleague about it, her immediate response was, “Do you have any relatives named Elizabeth?”

We hadn’t told anyone what we were naming our child, who we didn’t yet know was a girl. We had the name picked out, very early in the pregnancy, but we had promised each other not to tell anyone.

The Visitation had never even occurred to me as I sat there, feeling those first little flutters inside my body, proof that my toilet hugging and love of sleep wasn’t symptomatic of brain loss.

Over the years, I’ve thought back about it, and I wonder if Mary and Elizabeth did the same. In that moment, sometimes, you don’t always fully appreciate. I think they had waaaay more wisdom than I do, but I’m sure they had many quiet moments to remember and consider.

But the journey began with them together. Mary went to Elizabeth, helped her, celebrated with her, comforted her. Did she glean the older woman’s insight? And did the older cousin, in return, savor the holiness and faithfulness of her blessed young visitor?

Just when I think I’ve exhausted a mystery of the rosary, something new comes to light for me. The Visitation remains one that teaches me about service and faithfulness, as well as joy and celebration.

“Just” Mary, the Girl from Nazareth – All Month

So often, I forget that Mary didn’t walk through life with a halo permanently attached to her head. I forget that she had menial tasks, ordinary chores, and a very real (and dirty) life to live. This month, all month long, we are invited to remember Mary, with her crowns and flowers, but also with her hands immersed in suds and her feet caked with dirt. There is glory in the work we all do, and Mary reminds us that it should always point us heavenward, to her Son.

Why May and Mary go together so well… 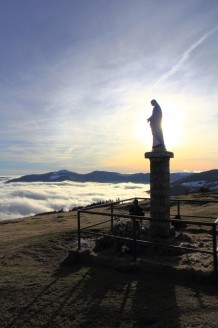 Camp Songs and Mary and Joy

The Inspiration of Mary the Ark