Outside my window:
The sky is lightening to a gray and the snow is glowing on the ground, the trees a black contrast to it all.

In thanksgiving:
For family, for tears, for friends.

Kitchen meanderings:
After a few days of no water in the kitchen (and then no water anywhere in the house!), I have a shined sink and some normalcy. It’s a week of meetings and appointments and catching up, so dinners this week will be simple.

Nose inserted:
I’m working on a friend’s manuscript, so my nose won’t be inserting itself into any fiction until I’m done with that. I am, however, also greatly enjoying St. Louis de Montfort’s True Devotion to the Blessed Virgin and Jim Hahn’s Rosary Meditations for Real Life during my morning prayer time. To say that I’m still reading volume two of Charlotte Mason’s homeschooling series, Parents and Children, is to exaggerate — I haven’t picked it up in weeks, though it’s there, calling to me. I read volume one the same way, in spurts, and I expect I’ll pull my nose out of the various Marian encyclicals I’ve been devouring in my reading time (along with that manuscript) and pick it back up and finish it in one great devouring.

In my ears:
I’m catching up on podcasts (story of my life of late!), and right now I’m working on the Christmas special that Joe McClane put together for The Catholic Hack. It’s fabulous, and though I’m late listening to it, it’s just as relevant to my recent projects as it would have been a month ago. I’ve also been downloading music from iTunes over the weekend, and it’s been a help to crank up some music (I hook my iPod up to some computer speakers that move from the playroom to the kitchen and back) and get the kids and I into a happier mood. My four-year-old is also becoming a StoryNory addict — last week she “borrowed” my iPod and the speakers while she did “projects” (messy, very involved painting and drawing) and played ponies, listening to Natasha read Alice in Wonderland (she didn’t last through the entire book, of course, and when she came back wanted it restarted) as well as some other stories.

Around the house:
Silence, blessed silence.

A favorite thing:
The faint smell of smoke when we open the top of the woodstove.

For the rest of the week:
It’s a week of catching up and crossing off and remembering, through it all, that I’m here to do His work and accomplish His will. 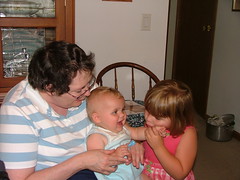 This is Aunt Charlotte, holding her “little bumblebee” (and likely singing), back in August. In the coming months, I’d like to sift through my 14,000 digital photos to find the Aunt C gems stashed away…

The 4th Day of Christmas Daybook