Sitting at His Feet and Finding the Answers There 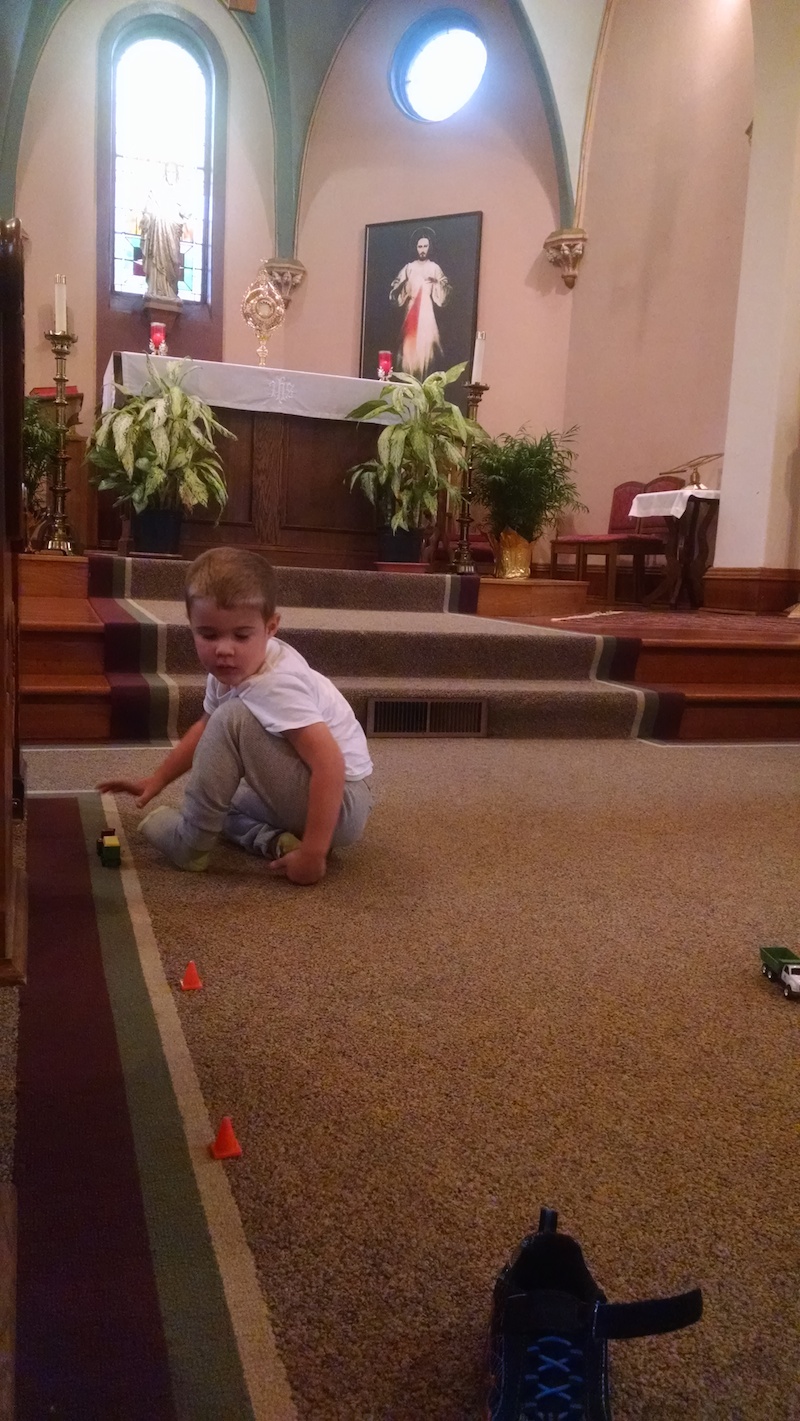 I wasn’t going to blog today, in part because I did this little update that crashed the back end of things, and partly because I’m a lazy bad blogger.

But after a visit to see JC, I decided that today was a day for blogging. 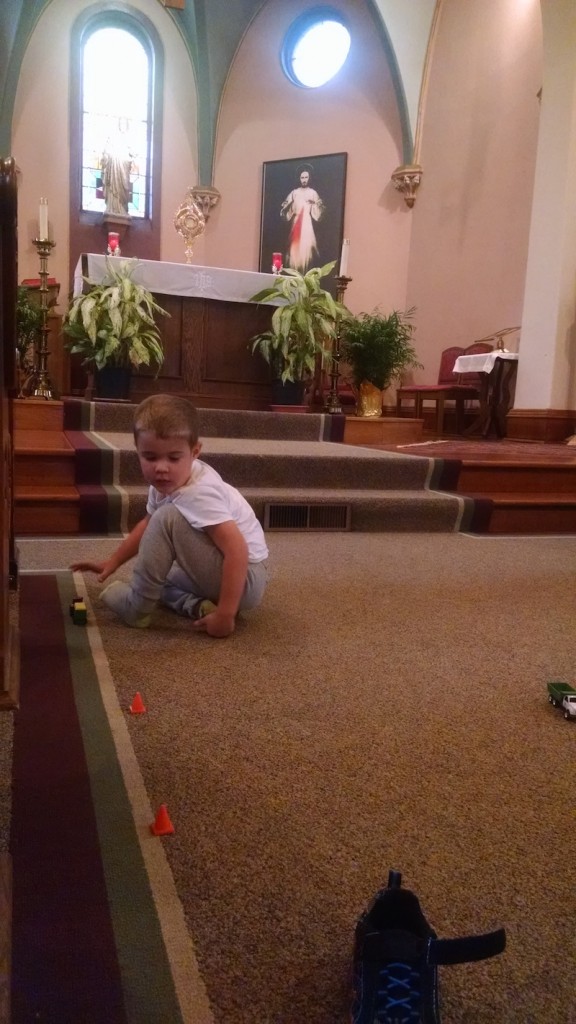 Yes, that’s my boy, playing tractors in front of the altar, in his PJs, with his shoes off. I don’t think Jesus minds, do you?

This morning, I sat down after the girls got on the bus and read the daily readings, as I try to do most days. I remembered (how could I have forgotten? I was just thinking of it yesterday!) that it was the feast of Our Lady of the Rosary, and I thought about how I could finish the rosary that was started.

I zipped through the first reading and sort of savored the Psalm (from 139, one of my favies).

Jesus entered a village
where a woman whose name was Martha welcomed him.
She had a sister named Mary
who sat beside the Lord at his feet listening to him speak.
Martha, burdened with much serving, came to him and said,
“Lord, do you not care
that my sister has left me by myself to do the serving?
Tell her to help me.”
The Lord said to her in reply,
“Martha, Martha, you are anxious and worried about many things.
There is need of only one thing.
Mary has chosen the better part
and it will not be taken from her.”

I reflected in my journal about how important it is to choose silence and allow ourselves the better part. (In fact, I just wrote about this for my post at Catholic Spiritual Direction today, so it was fresh on my mind.) I prayed for the strength to be like Mary, even in the face of the many duties I have, the demands I face, the temptation to just keep going, going, going.

And with that, I was off to the races, with my laptop open and a sudden calamity in front of me. Last night, I had done what I’ve done many, many times: I updated plugins. No, I didn’t back up my site. (It’s backed up on the server. And I trust my server guy. Or I’m stupid.) No, I didn’t think much of it.

But when I tried to get in and do a little update (still last night), I was foiled. I sent an email to my server guy and figured all would be well in the morning.

IT WAS NOT WELL THIS MORNING.

Forgetting all about the gospel reading, I texted my mother-in-law that I would probably stay home instead of joining her for Adoration. I texted two friends that I wouldn’t make it for our planned get-together tomorrow.

And then I all but tore out my hair and started almost crying.

Just what was I to do? I googled and found a solution. But I couldn’t log in to the back end of things. I emailed and texted some techie friends, but people have lives and other responsibilities.

My friends replied. One of them promised to remember me at Mass, where she was heading. The other replied, “I think maybe I know why this is happening.”

I won’t go into details, and I may or may not have called her a punk in my reply (and in the subsequent phone call), but there was such comfort in seeing God at work.

It was also my reminder to get off my duff, put shoes on the boy, pack up some tractors, and head into town for some silence.

Because sometimes, you just have to stop what you’re doing and pull the Mary out of your Martha and go sit at his feet.

Over at Catholic Exchange today, I have a piece about Mary as Our Lady of the Rosary.

As Our Lady of the Rosary, Mary smiles at me the same way I smile at my six-year-old struggling to learn to spell words and write sentences. She was given the title after appearing to Saint Dominic in 1208 in a church in Prouille, France.

Later, in 1571, Pope Pius V declared a feast in honor of Our Lady of the Rosary because of the miraculous win of the battle of Lepanto. He had asked Christians to pray the rosary for a win. The odds didn’t look good: the Turkish fleet should have been guaranteed to win —they had killed nearly all the men defending the Malta fortress. Pius V sent his fleet out to meet the enemy, even as the prayer warriors pleaded for Mary’s prayers by way of the rosary, and, incredibly, they won.

This story, which has the feel of a legend, makes me think of the power of prayer, and especially of the rosary. It’s so easy to take it for granted, to see it as just one of many things I should be doing.

Prayer was an area that was particularly interesting to me as a new Catholic. I was comforted by one prayer in particular: the Hail Mary. When I couldn’t find the words to ask for comfort, to look for guidance, to thank God for his generosity, the Hail Mary waited as a 41-word answer, a prayer easily remembered and poetically appealing.

Go on over and enjoy the whole thing.

Quick Takes on The Rosary Workout 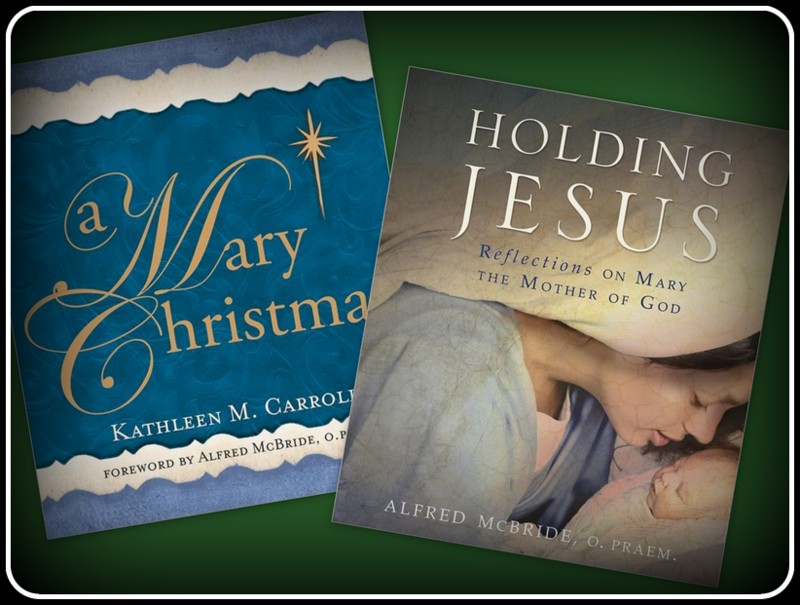 Spending Advent with Mary: Two Books to Guide You Closer to Christ