Young Mom blogs about life with three children aged three and under at Musings of a Young Mom. She is the wife of a Protestant Minister, but is interested in the Catholic Church. She uses her blog to write about her religious journey as well. Today she shares about her battles with sleep…and asks for your input. 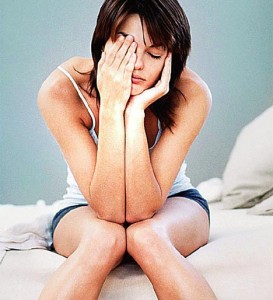 With the birth of my second child, life changed forever. Ms. Drama never slept. From the day of her birth, that child screamed. Before my milk came in (those were a LONG two days!) she was so upset that despite everything I did, she screamed herself hoarse. I remember the nurse was surprised by how strange her cry sounded, she had never heard a hoarse newborn before. The only place she would not cry, was skin to skin, and once I discovered this, Ms. Drama spent the first few days of her life stripped down to her diaper inside my shirt.
She refused to nap for more than 10 minutes during the day. At night she slept on my chest for 20 minute intervals in-between nursings. She was the baby who woke up at the slightest noise. The moment you lowered her limp sleeping body into bed she was wide awake again. I remember being so desperate for her to sleep, I would lay perfectly still while she nursed herself to sleep and then (rather than risk moving her) tried to relax enough to let my exhausted body fall asleep in that awkward twisted position.
When even the slightest movement in our bed started to wake her up, we moved her to the crib at around nine months old. She woke up 6-10 times a night for two months, wanting to nurse. I used to fall asleep on the couch sitting upright while she nursed. I remember going through the 15 minute process of sneaking her back into her bed and crawling into my own with a sigh of relief only to have her wake up 10 minutes later screaming. I would be dragged from the edge of deep sleep by the shot of mommy adrenaline and stagger my way to her crib, crying tears of exhaustion.
By the time Ms. Drama began sleeping and napping regularly, I had a new baby nursing at night. My oldest child had decided that she no longer needed naps, so any hope of getting back my much needed daytime nap was gone.
For a long time I bought the line, “it’s just a normal part of this stage of motherhood”, and figured that eventually I wouldn’t be as tired anymore. But now I realize this was more than your average tired. I didn’t even recognize it, because it had become a habit. A bad one.
In my efforts to deal with the “normal” challenges of motherhood, I had tried to do it all. I wanted to make sure my husband got enough sleep in the mornings, I wanted to keep up with my children and my house, and I wanted to stay up to be with my hubby in the evening. I wanted to be a good wife and mother. I was sabotaging myself. If I think about it now, I have been getting an average of five or less hours of patchy intterupted sleep a night for two years. No wonder my eyes would close in mid-conversation despite my best efforts to stay awake. No wonder my speech would slur from exhaustion as I struggled to read books to my kids.  My lack of energy wasn’t going to be solved by any amount of supplements or organization. I needed sleep.
Its awfully hard for me to ask for help, for some reason it’s even hard for me to accept help. It’s like I am admitting failure, and that is not something I want to do! But when my husband figured out on his own just how little sleep I was getting and accused me of being a “sleep anorexic,” that was when I knew I had been wrong. I couldn’t do it all.
Now, with my wonderful husband’s help I am trying again. We have a new bedtime of 10 PM, so even if the baby has a hard time settling down, I get to sleep before midnight. The earlier bedtime allows my hubby to get the sleep he needs, and since he is not getting up with the baby at night, he has been getting up at the crack of dawn when the girls wake up. It’s only been a week, and I already feel more human.
What is your approach to rest? What are some of your ideas for getting the sleep you need?

To My Husband on Mother’s Day