Posted by Guest | guest post, Inspired by the Virgin Mary | 3 |

Barb Szyszkiewicz has been a friend since my early days of blogging, and her blog, SFO Mom, never ceases to entertain me, even as it educates me about Catholic living. Barb is a secular Franciscan and graciously offered to share more about the Franciscan Crown Rosary in a guest post. Enjoy! 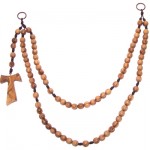 October is the Month of the Holy Rosary, and I’m sure it’s no coincidence that the Feast of Saint Francis of Assisi falls during this month.  Saint Francis had a great devotion to the Blessed Mother.

According to the Rule of the Secular Franciscan Order, “The Virgin Mary, humble servant of the Lord, was open to His every word and call. She was embraced by Francis with indescribable love and declared the protectress and advocate of his family.” Saint Francis encouraged his followers to express their ardent love for her by imitating her complete self-giving and by praying earnestly and confidently.

The Rosary is a wonderful way to honor the Blessed Mother through prayer. The Franciscan Crown Rosary began in the early 15th century, when a young man used to pray while weaving crowns of wildflowers for a beautiful statue of Mary. After entering the Franciscan Order, he did not have the time to gather the flowers for this personal devotion and was even tempted to abandon his vocation. One evening the Blessed Virgin appeared to him and encouraged him to persevere, reminding him of the joyfulness of the Franciscan spirit. She also instructed him to meditate daily on seven joyful events from her own life as a new form of the rosary. Instead of a crown of flowers, the novice would now weave a crown of prayers.

The Seven Joys in the Crown of Mary are:

The Franciscan Crown Rosary is a seven-decade Rosary, and the beginning part of the Rosary is slightly different from standard ones. There is a cross on the end, and then two sets of two beads, then one single bead.  You can, however, use a standard Rosary to pray the Franciscan Crown, as long as you backtrack a bit for those last two decades!  Alternatively, use a finger rosary.

How to pray the Franciscan Crown Rosary:

A Different Perspective: Coming Out as an Atheist

Turning to Mary on Monday