Outside my window: It’s gearing up to be a hot, hot, hot day.  We can’t complain, because we haven’t had many this summer.  (That won’t stop me from complaining, though.)

Rambling thoughts: Moving my blog to these new digs was stressful, in the way that fun things can be.  I’m trying to remember all the things I have to do as a result of this move, but also keep in mind that, ahem, I’m really just a small fry.  It doesn’t matter to anyone, really, but me.  Right?  So it’s no big deal.

In thanksgiving: For a weekend spent with family. For a day that will (hopefully) be full of things done. For peace in discernment (even amidst the uncertainty).  For fans, lots and lots of fans (and for other people’s air conditioning, which I might well be taking advantage of later in the day).

Nose inserted: Two new reads, just started yesterday: Our Lady of Guadalupe: Mother of the Civilization of Love, by Carl Anderson & Eduardo Chavez and The Death of a Pope, by Piers Paul Read

In my ears: The new Darius Rucker album, which promises to be fabulous (I haven’t listened yet).

Around the house: Magic Schoolbus in the living room, sleeping toddler upstairs, and I’m debating whether I should save my shower until later, when I’ll need cooling off.

A favorite thing: A new CD which I didn’t have to buy, but which I can enjoy all the same.

For the rest of the week: This week, I’m planning to get a lot of writing and learning about WordPress templates done.  That said, I’m trying very hard to be open to the fact that what I have planned might not be the what God wants me to do.  (That, my friends, is easier typed than lived for me!)

Food for thought: “But even when I find myself attempting to remove (another) stain of squashed berries from the carpet when I’d certainly rather be napping or reading or doing anything but damage control, I don’t feel like I’m in prison. Quite the opposite, actually. What motherhood has really done for me is liberate me from a life that surely would have been more about Me, Myself, and I rather than the Holy Trinity.”  Kate Wicker, in her wonderful column “Motherhood is Not a Prison Sentence“

Worth a thousand words: Great Grandma and her helpers: 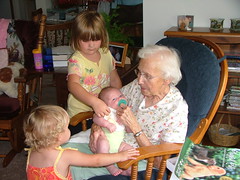 Stormy and Overcast with a Guarantee of Writing

A Daybook for Stormy Weather