The Power of Tears at Catholic Exchange

Posted by Sarah Reinhard | Inspired by the Virgin Mary, writing | 0 | 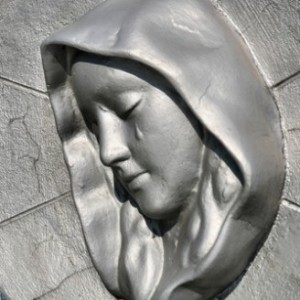 A nun, a prayer, and a new way to pray. It’s not a new story, not really. It is, though, one I love to tell, and I’m telling it over at Catholic Exchange today:

Our Lady of Tears presents us with an image of the Blessed Mother, and an opportunity to transform our own tears into prayer.

It all started on November 8, 1929, in Campinas, Brazil. Sister Amalia, of the Institute of the Missionaries of the Scourged Jesus, felt pangs of sorrow for a mother in her life. She had just met with a male relative who was in great distress. His wife, seriously ill, had been diagnosed by several doctors as incurable.

Sister Amalia, pained at her relative’s grief and the thought of the sorrow facing him and his children, turned immediately to Jesus. She felt called to go to the chapel. She knelt in front of the altar with her arms held out toward the tabernacle and spoke, offering her own life in exchange for the life of the mother.

Read the rest at Catholic Exchange –>