The Sacrifice of the Mass

I am reminded continuously, and in many different contexts, though, that the sacrifice of the Mass often points me to that ultimate sacrifice Jesus made for each of us through the experience of the sacrifices in my life. Sometimes, just being at Mass is a sacrifice, whether because I’m giving up time of my own or because a certain family member is being less-than-agreeable. This weekend was one of the latter times, when I was in tears before the opening hymn was done (granted, the tears had as much to do with my own personal burdens as with anything Toddler-tron was doing). I spent the entire time in the back of the church, battling the distractions in my mind that were taking me far away from the miracle of the Mass before me, and trying not to resent the little handful for just being a toddler.

I had small success telling myself what I have told so many other mothers in our parish, that by having a fussy child in Mass you send a clear message to the entire assembly and you remind all of us that children are vital and important and, lo and behold, not always silent. People were looking at me, and though I knew that most of them intended to be supportive with their looks, I still felt hot under their scrutiny. How many times have I assured other mothers that these kind souls only intend to be the family we so need, to give us encouragement as we struggle with our handfuls? Why couldn’t I feel that in their looks? After Mass, owners of at least 90 percent of those looks gave me comments that supported the positive assumptions I’ve assured others of.

The problem, I have determined, lies not in the assembly. The problem lies in me. I have not fully accepted my vocation as mother, and I have so much growing to do! I have a hang-up with being perfect, with how others see me, with things that matter not for the good of my soul.

Before we had a Babycakes in tow at Mass, I experienced the sacrifice of the Mass in a whole different way. You see, the beauty of this faith of ours often overwhelms me. The coming home feeling is so wonderful and so needed that I often would cry during Mass. I’ve had people tell me that they are inspired by my display of emotion. For the most part, I’m only embarrassed, and cleansed, and humbled. I mean, when you can’t even make it through Mass with a straight face, what’s your problem?

The lesson of humility is ongoing. Just recently, a wise friend said nothing humbles you like having a child. Had she told me that before I had a child, I would have said, “oh no, snotting into the chalice, that will humble you.” Now, though, I see just what she means. And I thank God for the beauty of the lesson, for his patience with my slow learning, and for the joy the little lesson gives me, such as the hug I got at the end of Mass this weekend.

Stay strong, mothers. Your little one will be out of the house before you know what happened, and you’ll be the bearer of the looks you’re receiving now (however they’re intended). Without this experience, would you really be able to offer that prayer during Mass, those words of encouragement afterward, that hug in an odd moment? As you learn the humility of motherhood, you walk with Mary toward her son. As you feel the pain of embarrassment and the burning sting of tears, remember that there is joy in the pain. When you look back, you will remember the joy, thanks to the pain. Stay strong! 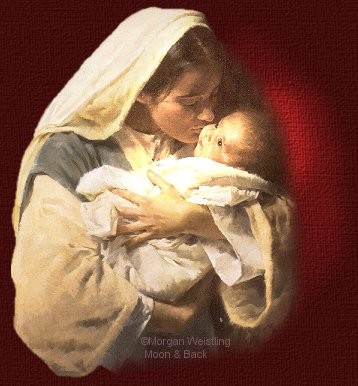 Because Yeah, Mary Was Human