Outside my window:
Gray morning light. I’m trying not to think of the forecast (snow flurries tomorrow).

Rambling thoughts:
If the girls are playing nicely now and the day stretches in front of me, an unmarked canvas, does it matter that the night was horrid and the morning started on the wrong foot? As a bonus, I was reminded by a wise woman the other day that while snow in April stinks, snow in May stinks worse. (How’s that for half-full?)

In thanksgiving:
For Sundays of rest.

Kitchen meanderings:
I’m not sure how I did it before I sat down at least once every two weeks to plan out our family’s dinners. In the next few months, I want to start planning side dishes too, but let’s not get ahead of ourselves.

Folded hands, bowed head:
For the grace this week to cooperate with God’s grace. (Yeah, it sounds redundant. But it’s just how I feel.)

In my ears:
I’ve made a special playlist for Holy Week, including the Dolorous Passion and Stations of the Cross that I linked to a few days ago. My listening this week will have a Holy Week flavor, to remind me of where our journey through Lent ends.

Around the house:
Girls playing in the other room. Kitchen lit, unfinished lunches started. Office lit, scattered mommy at computer.

For the rest of the week:
It’s a week that will include two of my favorite Masses, Holy Thursday and the Easter Vigil. It’s a week of preparing for a holiday that could be just another “Hallmark holiday,” but which I want my children to appreciate for more than just gifts and dresses (but candy, candy’s an OK thing to salute, dontcha think?). It’s a week of intense sorrow and immense joy.

Worth a thousand words:
Girls hard at work outside (because there was no sign of snow yesterday). 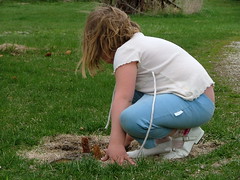 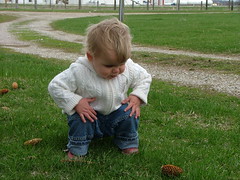 Daybook on the Brink of Lent 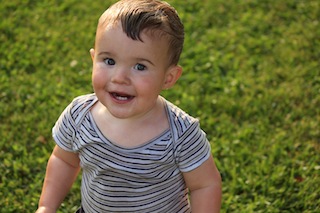