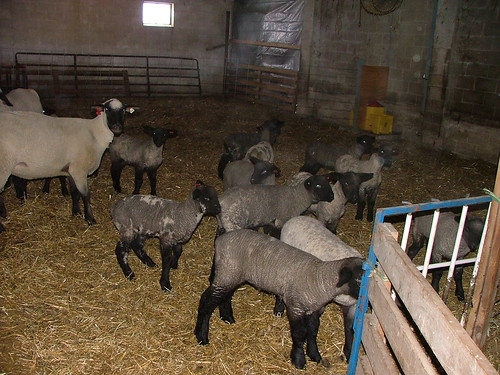 Our barn is bursting with lambs. Until they’re weaned and they go back to the main barn, where my brother-in-law can keep his eye on them and prepare himself (and them) for fair days, I plan to enjoy every day!
The lambs we have here were born last month. They’re my favorite age right now. Know how everyone thinks toddlers are a blast, unless they live with them? Well, that’s how these lambs are. They are full of vim and vigor, but they still have an affectionate nod or two in them. They can pause to let you pet them – maybe – and they still have that gray baby coat (except for the piebalds, who are truly the fashionistas of the bunch, though BIL and Hubby assure me that’s not “desired”).
Rosie comes right up to the feeder and lets Small Fry pet her. The others are far more interested in climbing the bale of straw that’s out there, in the middle, waiting for Hubby to spread it around for their bedding. They have a complicated version of King of the Hill that they play, where everyone gets a turn until someone bigger or stronger comes along. The game inspires 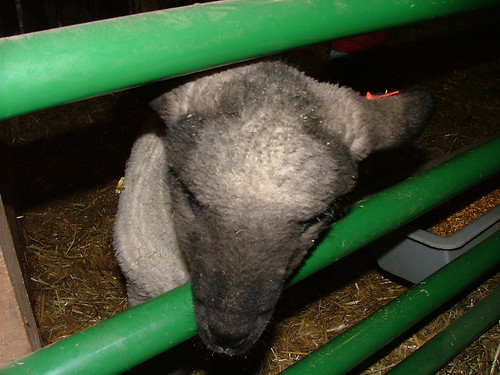 the vertical leaps that only lambs and deer seem to be able to achieve with no effort. Then, once the straw is spread, their excitement seems to hang in the air, and they have to boing-boing-BING up to reach it.
The ewe-mamas could care less. They have fresh hay in the feeder, and that’s where the milk comes from. One or two of the ewes will nudge around, see nothing interesting, and head back to the hay. One or two of the bigger lambs will go see what’s so interesting to the mamas, strain up into the feeder, smell only hay, and head back to the fun.

It was in the energy of the barn last night, as I forgot about my frozen extremities, that I thought about how we are compared to sheep in so many of Jesus’ teachings. Watching those lamb-babies express all the joy their little fuzzy heads could hold, I could see why someone would leave the 99 and pursue the one – which doesn’t make good business sense, Padre reminds us often. Does good business sense really matter when Rosie’s gotten out? The other 99 are safe. Let’s go get Rosie.

And if you’re the shepherd, delivering all these lamb babies this time of year, how can you not feel how deep Jesus’ love for us is? It affects us all when one lamb is lost. Yeah, there are 99 others, but that one could have been THE one – you know, the Grand Champion, the Next Big Thing. (On the other hand, it doesn’t affect us enough, not nearly enough, to compare it to Jesus’ love.)

Throughout lambing season, there’s an enormous sacrifice of time – baby monitors in the barns and the houses (over at their house, not ours – we’re the “holding tank,” not the “birthing ball”), middle-of-the-night checks on the ewes known to be quiet and those first-year ewes. There’s the breath-holding of lambs that are positioned wrong, and the feeling of having things all in God’s hands, even as they try, try, try, to save every single lamb they can.

So why did Jesus choose this analogy? Every time I’m in the barn, and especially now, when the lambs are at their finest frolicking, I get a glimpse of it. I feel like being a sheep and receiving His care isn’t so bad. Yeah, maybe I’m going to eat hay the rest of my life, but every so often, I’ll get fresh grass. No, maybe I won’t be much more than just the mother of someone important, but there’s a chance I’ll get my back scratched when it’s hot out and sheared down when I need it.

I never said the lines would be straight