Tribute to a Sailor

In past years, on the Fourth of July, I’ve reflected on the height of the corn, the amber waves of grain all around me, and freedom. This year, I have the military on my mind.

The Fourth of July started meaning something different, something more, to me a few years ago. My brother, a newly minted member of the Navy, had been deployed. He wrote weekly via email (a wonderful blessing), but he was thousands of miles away and, well, not exactly safe. (Oh, he assured us that he was safe, but…are you ever safe, truly, when you’re deployed?)

When he came home, I had the opportunity to ride the ship with him, in a Tiger Cruise. It was a chance to spend the night on the ship (the USS Iwo Jima) and ride it into harbor. I slept in a bed like his (which was more like a shelf on the wall, though surprisingly comfortable), and I ate the same food they did (which wasn’t so bad).

I laugh to look at one of my favorite photos of the trip: 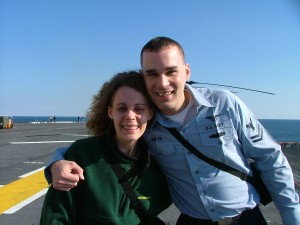 Neither of us was married in that picture. He was at the beginning of his Navy career (he’s quite a bit farther along in it now). Neither of us were parents (or had any idea when we would be parents).

Because of some technicality or other, we had a chance to ride the air boats (which have a technical name that I don’t remember) back to shore and watch the ship come in. 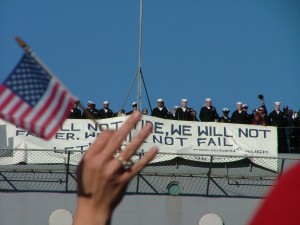 I was changed that day. Suddenly, freedom had a face. Whatever my thoughts on the war (then or now), I could not deny those people standing at attention on the front of the ship coming at me. 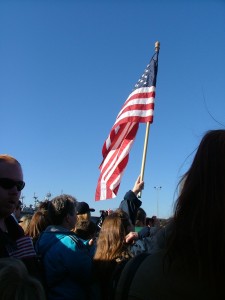 I still get teary when I think of the women, the children, the families, and the fellow sailors who crowded the dock. 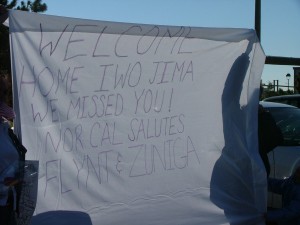 This year, on the day our country celebrates its independence, I’m going to remember the military and all of those who hold those members of the military close. Without their sacrifice — of time and sometimes of life — I would not have the freedom to enjoy the hamburgers and fireworks on this national holiday.

Whether we agree with the politics behind them or not, let’s remember that today is not a day about food and family, but a tribute to a country who began with a document we would all do well to revisit and ponder today.

May the truths we hold to be self-evident remain true to the intentions of those signers.

And may we keep our military and their loved ones close in prayer.

Glorious St. Michael, Prince of the heavenly hosts, who standest always ready to give assistance to the people of God; who didst fight with the dragon, the old serpent, and didst cast him out of heaven, and now valiantly defendest the Church of God that the gates of hell may never prevail against her, I earnestly entreat thee to assist me also, in the painful and dangerous conflict which I have to sustain against the same formidable foe. Be with me, O mighty Prince! that I may courageously fight and wholly vanquish that proud spirit, whom thou hast by the Divine Power, so gloriously overthrown, and whom our powerful King, Jesus Christ, has, in our nature, so completely overcome; to the end that having triumphed over the enemy of my salvation, I may with thee and the holy angels, praise the clemency of God who, having refused mercy to the rebellious angels after their fall, has granted repentance and forgiveness to fallen man. Amen. (From CatholicMil.org)