Outside my window
Sunrise is just wrapping up and the day is starting
~~~
In my thoughts
Divine Mercy and its impact on my life
This month’s Mary Moments
The to-do for this week
~~~
In thanksgiving
For a weekend of winterizing and pop-up projects, which could have been filled with stress, but included s’mores instead
~~~
Kitchen meanderings
The kitchen and I are going different directions. Says the kitchen, “Come, enjoy (but first go buy a bunch of stuff)!” Replies me, “Sorry, friendly kitchen, but we’re on a ‘make-do’ sort of experiment lately…” And there sits Saving Dinner, beckoning or mocking, I can’t decide.
~~~
On my body
Denim short-sleeved shirt (there’s hope for warmth outside), khakis (it’s too cold this morning for capris), slippers, and a towel. I won’t last much longer without a sweater though!
~~~
Using my creative powers
To decide whether the smell of the new (to us) washer and dryer will go away on its own, whether that empty load with vinegar will do the trick in the washer, and planning and chewing on the new layout of the laundry room. (Have you guessed what the pop-up project was this weekend?)
~~~
Going places
This is a different sort of week…Thursday, our parish adopted an abortion clinic and we’ll be praying outside it. A friend and I have partnered up, so I’ll watch her kids in the morning and she’ll watch mine in the afternoon…and I’m sure I’ll have much to say. This is something I’ve always meant to do, but I always had an excuse not to. Then, this weekend, we have a fun little trip planned (and all sorts of craziness to be squeezed in between those two big things).
~~~
Nose inserted
Auralia’s Colors, by Jeffery Overstreet (which I’m enjoying immensely)
Home Education, by Charlotte Mason (which, though I’m enjoying, has the handicap of not being fiction)
~~~
Hopes and dreams
A night of uninterrupted sleep
No more new teeth for a week or two (she’s working on #7)
Finishing a book
Time with hubby
Earlier rising (as opposed to getting up through the night)
Continued awareness of my complaining habit (and improvement!)
~~~
In my ears
The sound of the washer finishing up that empty cycle
The finale of The Wonder Stick (hopefully I’ll finish that this week!)
~~~
Around the house
It’s still and quiet (aside from the washer), but it’s also after 8, so I’m going to have to go gently wake the sleeping beauties
~~~
A favorite thing
Hot coffee with milk or (better yet) half-and-half, or, later in the day, ginseng peppermint tea
~~~
For the rest of the week
A blur of work stuff and running hither, even while I pause mid-week for a quiet hour and curl up on the sofa at least one or two evenings with a book
~~~
Worth a thousand words 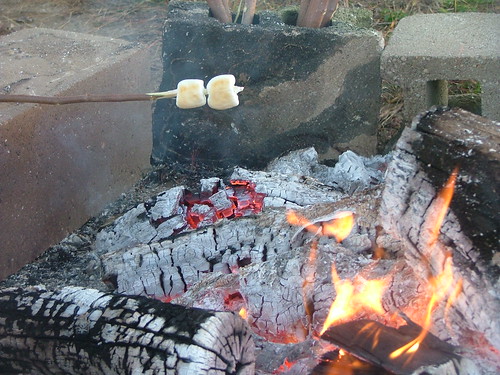 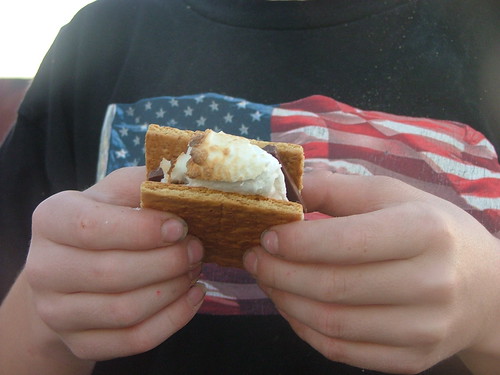 From this weekend’s weenie roast…perfect s’mores!