What WOULD Mary Do?

Posted by Sarah Reinhard | in the world, Inspired by the Virgin Mary, Mary Moment Mondays | 9 | 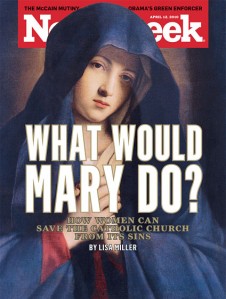 It was a strange occurrence that found me at a newsstand today, with a beautiful image of the Virgin Mary looking back at me, the words “What would Mary do?” emblazoned across the cover of Newsweek.

That subtitle, “How women can save the Catholic Church from its sins,” should have tipped me off, but I still held a thread of hope.

This week’s Mary Moment Monday was going to be something about Mary in the spring, about how I find her in the cracks and crevices of my lawn, where the tulips have been picked by little fingers and handed to me. Instead, I find myself wading into the murky waters of scandal.

As for the role of women, which this article maintains is the problem — perhaps, had there been women in the hierarchy, we could have avoided these scandals (Really?) — I have to just shake my head. In our parish, which I’ve been heavily involved in, behind the scenes, for the last six years, women are the cogs in the wheel. In fact, if I took attendance, last I checked, it takes both men and women. If there’s a woman in the pew or at an event, there’s a chance there’s a man somewhere supporting her choice or decision to spend her time there. Maybe he’s her father, the one who raised her Catholic, or her husband, or a big brother. He might be a priest who struck a chord with her (not in a scandalous way, mind you) or a deacon who encouraged her to go to college when everyone else told her it would be a waste of her time.

The Church is made up of men, yes. Priests are men, yes. Let’s not debate whether women need to priests or what Jesus meant. Let’s not cite things that aren’t considered valid to all of us.

Believe it or not, you can be celibate and still have an idea of what it means not to be celibate. There’s beauty in that. In fact, it gives me a greater respect for these men (and women) who choose celibacy. It’s hard. It’s a sacrifice. That’s what makes it such a discernment.

The real problem is: our Church is made up of humans. And there’s really no way around it.

This latest turn of events has only been a reminder of the age-old mystery that I wrestled with for so long, that humans have been wrestling with for the past two thousand years: that God exists, and even came down to walk among us, and yet he did not stop the suffering. He didn’t take away a single person’s free will — not even those whom he guides to speak on his behalf — and did not exempt one person from the potential to experience the worst kind of suffering. Not innocent children. Not even his own beloved Son. The way he dealt with suffering was to plunge himself into the heart of it, to come down and suffer with us, and for us. Nothing more. Nothing less.

What I’ve found is that, if you can muster up the courage to face that truth head-on, to accept it with all its weight, and resist the urge to run away, it is there that you will encounter Christ.

(It’s worth taking the time to read that entire post, “Safe Miracles,” which is Jen’s take on the scandals as a convert. She writes a lot that makes me nod, though my own experience is slightly different.)

In the interest of giving you something else to read that will hearten you and give you accurate, enlightening information, why not read George Weigel’s article in the same issue?

Updated, thanks to Erin M. in the comments: Here’s the link to the original article.

The Rosary that Changed the Way I Pray the Rosary