Posted by Sarah Reinhard | Inspired by the Virgin Mary, reflection | 4 |

I’ve written about going to Mass without my daughter, and I have also written about the screaming and the struggles. I’ve reflected on whether Jesus was a toddler and I’ve pondered who’s really being potty-trained. In all of this, I have overlooked an important question, one that came to the forefront recently when I followed a link from a new visitor’s comment, and read their post about not being able to go to Mass.

Mass, for me, started as a way to spend time with my boyfriend. Not only was he the only man I knew who could be under 50 and sport a beard and look, oh yes, very attractive, but he was caring and compassionate and could penetrate to my very soul with his eyes while listening to me ramble about, oh, anything. (The above is all still true, eight years later.) Scholar was not the sort to get up early and do anything voluntarily. So why, I wondered, did he get up so doggoned early to go to…church? Just what were those Catholics doing, besides drinking real wine? Being raised a good, clueless, flavor-of-the-month Christian, I knew only that Catholicism was the hardest of all the Christianity flavors. But I had gotten to know Scholar’s mother and others in his family, and their quiet faith, without trying to convert me by selling me on Catholicism or “saving” me, was befuddling to me.

I am reminded by the tears so often in my eyes during Mass that conversion is an ongoing, lifelong process. My hard heart remembers how it was, and it so often tries to return to the state it was in. It is so tempting to listen to the world, and to ignore the value and the beauty of the gifts God has given us, whether they are children or talents. I still cry in Mass. My husband admits that he would too, if he didn’t sit silently through much of it (I had no idea!). I am still overcome by the thought of God’s mercy, and Mary has not stopped reaching out to me in the five years since I first experienced her influence. I often reflect that only Mary could have brought me into the Catholic Church, because what I have always been seeking is an unconditional breast upon which to lay my head, a warm place to release my sorrows and fears, a safe haven for my recovery from all that life has thrown my way.

So what’s Mass for, anyway?

The Eucharist is the ultimate gift. We’re invited to the wedding feast by the Bridegroom Himself. We can opt out; we can come up with reasons why we can’t make it. The ones who are hurt by those choices, though, are us. The devil wins when we give in to this reasoning. Giving that one hour to God is the least I can do, and it’s the least I need to do to keep muddling through my life. My lifeblood is up there on that altar, offered for me whenever I choose to receive it, there to redeem me over and over again. The sacraments are not to be cast away lightly; there’s a reason we have all seven of them! Don’t underestimate the gift you have in the Eucharist. Don’t let it slide between your fingers as you doze in your chair, because it will keep you alive, and it is the ticket to the next life. 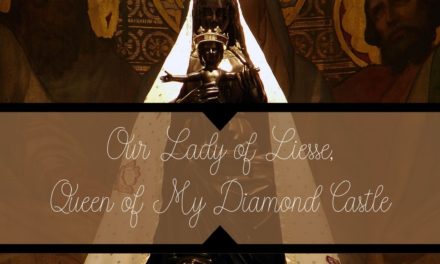 Our Lady of Liesse, Queen of My Diamond Castle