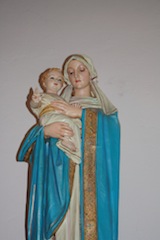 It’s Mary’s fault that I write.

Yes, I blame her. Writing was a dream of mine years ago, when I was a wee girl living in the country and filling notebooks with terrible tales, but I never thought I’d actually do it as work.

The reality of writing, though, is such that I can only shake my head and surmise that, surely, only God’s MOTHER could be responsible for this.

I was going to be so! much! more! The image of me frantically pecking at a keyboard while kids are bouncing off the walls or while racing the nap times and potty breaks and snack times is so far from what I had planned for myself that I can’t help but laugh…still…all these years later.

It all started when Father was out of town and I was holding down the parish office by myself. During that week, I had what felt like a whole series of weird “Mary signs.” I don’t know what else to call them. They were significant to me at the time, but if I shared them with you now, you’d laugh (and I wouldn’t blame you).

I was so moved by them that I started a list and bombarded Father with them when he returned.

“Well,” he said. As I rambled on and on and ON, he sat there and probably tried not to smile.

It was later that year that I started blogging, which was intended to be a daily writing exercise. The feeling that I was supposed to write was…uncomfortable. It’s not that I didn’t think I could do it, it was that I really had no training for the craft, for the networks, for all the ins and outs.

I don’t think it’s a coincidence that my big “break” into writing came as a result of a column about Mary’s various titles over at Catholic Exchange. And then there was the opportunity to join the Catholic Moments show with a “Mary Moment” (which has since moved over to iPadre).

Opportunities kept growing and expanding. In fact, my Marian writing is what seems to always attract people, to get the leads, to keep my writing alive.

So I guess the least I can do is keep plugging along, relying on her (and her Son!) for help and strength on the journey.

Do you have a patron for your writing (or work) endeavors? I’d love to hear your stories in the comments!

A version of this post originally appeared at the Catholic Writers Guild blog, where I write weekly about blogging or whatever strikes my fancy.

Online Retreat Week 7: The Quilt of My Life