Why They’re My Favorite Fair Pictures

Every year at the fair, there are two pictures I take, and, later, two moments I gaze back on with wonder. I’ve been taking these pictures since my nieces and nephew were much younger and much newer at their jobs in the show ring. The scenes present themselves each year even though the kids are older and the parents wiser.

The first is the “coaching” picture. 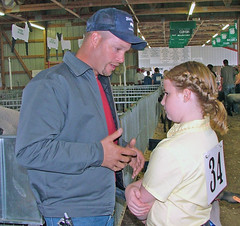 Without fail, I catch my brother-in-law, that tough shepherd whose soft side is well beneath the layer of work and competitiveness, hunkered up with one of the kids – usually my oldest niece – and just being Daddy. Oh yes, he’s giving her pointers. But what he’s really doing – and what I see when I look back at the pictures later – is boosting her confidence, instilling his trust in her, telling her with his time and attention that he loves her. When I look back at the pictures, I see something in her too; I see that she knows Daddy loves her without fail and no matter how it goes out there in the ring.

The second picture (or set, as the case often turns out to be) is the “hair and makeup” shot. 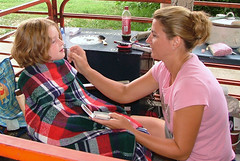 Every year, the kids have participated in the lead show, where they dress up in wool outfits and lead their lamb in front of judges, modeling the outfit and in general just hamming it up. 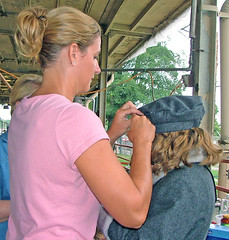 And every year, my sister-in-law fusses and preens the kids. She curls the girls’ hair and puts makeup (but not too much – they’re just kids!) on them. She forces my nephew to sit still and put on clean socks and wet down his cowlick (could that be why he jumped ship on the gig this year?). 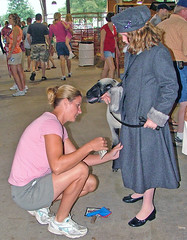 This year, as she really went all-out with my oldest niece, sparkling up her cheeks and clucking a reminder to the younger one to be careful in her hose, I had a glimpse of proms and graduations and wedding days, of the bond that mother and daughter share through these beauty treatments. 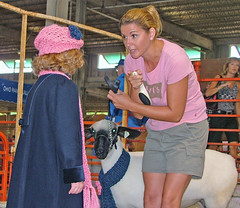 These two pictures epitomize, for me, what is best about the fair. They capture the essence of family and freeze the tenderness it gets harder to share as the kids shoot up and wander away to their own lives. I see my brother-in-law with his guard down, his heart bared; I catch my sister-in-law able to cuddle her too-big-to-be-held babies and see a glimpse of the young women my nieces are becoming.

Curing the Summertime Blues, by Maia

All’s Fair in Sheep and Rides

The Story of Meeting Prince Charming