Yesterday, I was down for the count. Late Thursday, the flu bug that had wracked my girls attacked me, and I was wiped out. My dear husband, buried in deadlines, went off to work yesterday morning, and my four-year-old was a tremendous helper. I lasted for an hour like that, and then I called my mommy-in-law, who promptly came over and saved the day.

I knew they were up to something in the kitchen in the afternoon, but didn’t have the energy to go see for myself until I smelled the baking. Here they are, in all their cookie decorating glory: 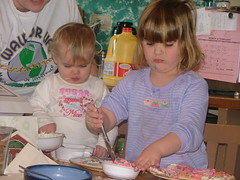 Noonie, on the left, apparently threw a fit when the cookies went into the oven. She wasn’t done rolling out the dough! Miss Muffet, serious decorator on the right, was correcting Noonie…”No, Noonie, this is how you do it.”

And here is the lovely plate of cookies that I’m still not able to dive into (stomach is slowly returning to normal, but is not there yet): 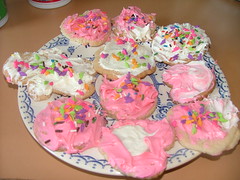 And my mommy-in law gets extra kudos for saving a dish of cookies I could eat (and that, incidentally, I prefer): non-iced! 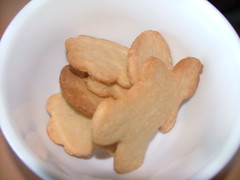 While we were inside this week, me largely on Puke Patrol, Prince Charming largely at work, there was a wind storm that tore our backyard apart. Though you can’t see it in this picture, my favorite irony of the destruction was that the empty trash cans I had so carefully stacked by the little shed were still there after the 70+ mph winds. The wind came from the southwest, apparently (which is the direction we’re facing in this photo): 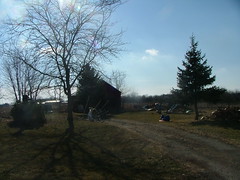 The wooden climby-slidey-treehouse was toppled (and the slide twisted in an interesting way): 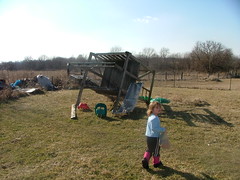 The metal swingset was dragged across the yard and plopped into the middle of the driveway: 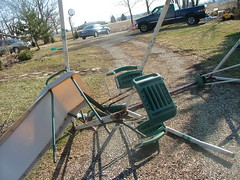 The little house that’s usually behind our house was across the street in the ditch: 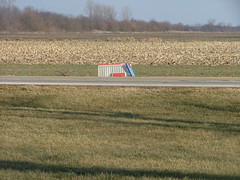 The little climbey thing we used to get onto the trampoline, across the yard: 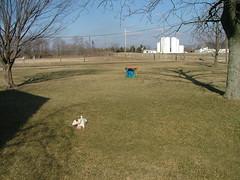 And now, the crowning glory of it all, the trampoline, anchored to my descecrated clothesline (that is going to need to be fixed before nice weather!), with one leg over the live power line that feeds the house from the pole (not from the street): 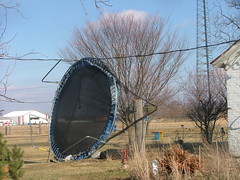 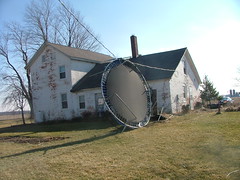 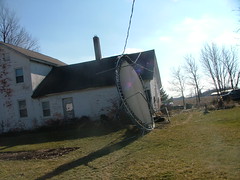 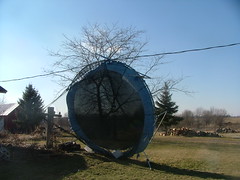 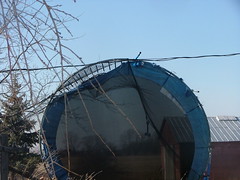 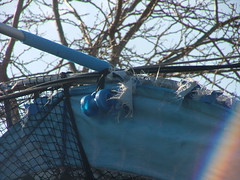 But Prince Charming came up with a way to get it down safely, and we’ll likely have jumpoline festivities once he restores it to safe jumping standards.

I’m still shaking my head over this one, though. The trampoline…hurled against the house, dangling from a power line, while the trash cans, empty, are stacked neatly against the shed.

And this post wouldn’t be quite complete without the obligatory picture of the cute Jack Russell Terror: 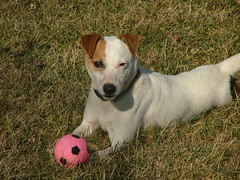 Wordless Wednesday: What Could She Be Plotting?

Looking for the Harvest