Did you look around at me when you heard the shrill scream after my daughter bit her finger this morning? Yeah, that’s right, it’s my kid who interrupted the homily, and it was my kid who was chowing on Cheerios right out of the gate. I don’t mean to be defensive; I just want you to know. I get defensive when I’m at another parish, but not at home. At home, I get comments afterward about how her happy noises are inspiring, how the moms never even heard her, how her laughs are well-timed for the consecration. At home, I find myself distracted when she’s not with me and feeling like I’ve lost a limb or some other vital part of my body. At home, I feel as safe and as comfortable as I do with family, and isn’t that just what it is?

But…to travel is to take this warm fuzzy feeling and to test it for all it’s worth. One weekend, we got glaring looks at a parish with a cry room because we weren’t in it with our happy infant. The guy in front of us could have had a checkerboard on his back, it was so stiff. Now, in charity, I prayed for him and asked God to help him with his back problem. It wasn’t until passing the peace that I got the hint about my daughter being the cause for his back problems. And the older couple across the aisle…I had to practically go to confession after I allowed the look they shot us to distract me from Heaven on Earth and think about how lonely it must be to not like children in Mass.

Not that I’m a fan of misbehaved children, and not that I’m trying to raise one (and hopefully more) that are like that. Not that I don’t hear what people are saying when they try to tactfully talk about food during Mass. Not that I don’t roll my eyes myself and struggle with my own tongue’s scathing comments (because there’s a plywood board in my eye, you see, and before I can remove it, I have to remove that foot from my mouth).

I tell the young mothers in our parish that they have an important role in bringing their infants, toddlers, and difficult children to Mass week after week. (And daily Mass at our parish is blissful – the crew often tells me “ah, she’s a CHILD; we love to have her here!”) On the one hand, they are setting an important example for other people, including those who don’t yet have children and those who do already. It takes courage to take on that hour, and it exhibits nothing less than trust in God some weeks! But it also reminds those around us just how children are. They aren’t quiet all the time, and they don’t sit still all the time. My daughter often waves at the people kneeling innocently unawares behind us, and we can’t correct it out of her (and in some ways, isn’t that the sort of friendliness and family-ness that we’re looking for?). It gets those other people in Mass used to kids, and it puts the words “we are family-friendly” into practice. It sends all the kids in Mass an important message too, and it puts more of “their own kind” there with them. It also sets them on that path to Heaven, and isn’t that our ultimate goal for them?

So stay strong! Yeah, that’s your kid making all the noise. As Father Pat says, they’re talking to the angels. And who knows what the angels are saying back? 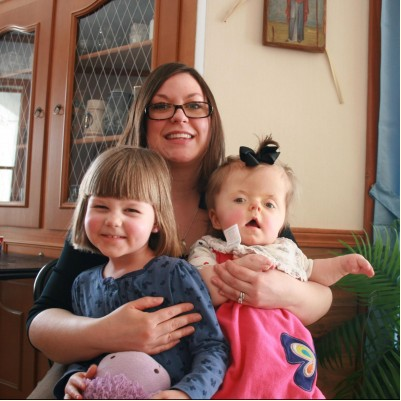 It’s Not About Me {Mom to Mom}

The Witness Talk of Many Tears